Users are central to the municipality of Rotterdam 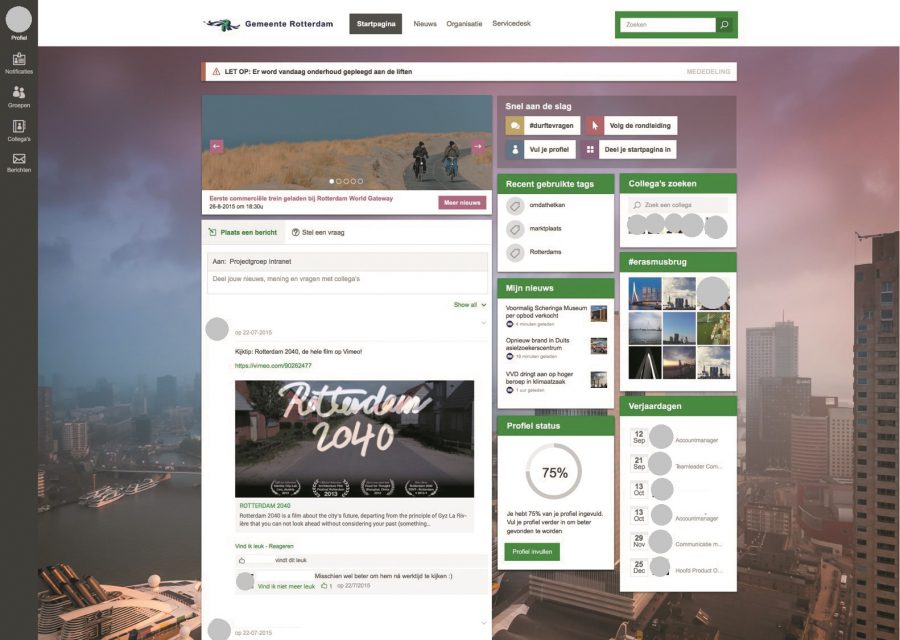 Since December 2015, an impressive 15,000 employees of the municipality of Rotterdam have used RIO, the new social intranet. We spoke to Petra Berrevoets, corporate digital media consultant, about how the project went. She spoke about the preliminary phase of the project, in which users were involved in the most significant challenges.

Why did you decide to set up a social intranet?

The main reason for choosing a social intranet was to break down barriers within the organisation and make sharing easier. Above all, we wanted an intranet everybody could contribute. We are an extremely large organisation, and employ about 11,000 staff. One problem in such a large organisation is that there is no overview about which colleagues use social media. People need to be able to find each other easily, and the intranet was intended to simplify collaboration on projects. This means it is necessary to be able to identify colleagues’ experiences, expertise and interests quickly, so they are easy to reach and talk to.

The project went beyond introducing a new system; it was about creating a new culture. The old intranet was mainly about the one-way transmission of information, but with the social intranet we can break down hierarchical barriers. We act in a smarter way, and make more use of each other’s knowledge and experiences.

How did the preliminary phase go?

Under the guidance of HatRabbits, the Rotterdam Innovation Agency, we held 4 brainstorming sessions about the new intranet with 120 colleagues in February 2015, during which about 2,400 ideas were collected. HatRabbits condensed all these ideas back into a vision: Clearly Rotterdam.

A number of requirements for the social intranet emerged from the HatRabbits sessions. It had to be a simple, user-friendly platform that would be pleasant to use, fun to visit, inspiring, and above all relevant to the users. The system had to make work more fun and smarter, on a platform which would excite users, yet be accessible to everyone.

The new intranet was intended to be a social platform for the entire organisation, where everyone should feel welcome. We therefore recruited ambassadors from all over the organisation to design and test the new intranet; for example, colleagues from the policy unit and external service, in addition to ICT and communication colleagues, were given the opportunity to express their opinions. It was a complete eye-opener for us. It immediately became clear that there was an enormous variation in digital levels, so we brought it back to its essence: an intranet focussed on the user.

How did you choose the supplier?

In June 2015, we sent out a request for tenders. That resulted in two suppliers, and we asked them to provide a Proof of Concept. A PoC is a supplier’s pilot software environment, which is used to demonstrate the product’s performance. In July 2015, about 100 colleagues tested these pilot environments. Embrace was the favourite, because it was easier to use.

What effects can you see now?

We went live in December 2015. In the week that followed, 200 groups were created where colleagues could collaborate. By February 2016, there were 510 groups. We were surprised by the scale of this growth, and we are now looking at how active all these groups are. Sometimes groups are created for topics that already exist, or which are very similar. For example, a marketplace where people exchange concert tickets, and a group for tickets for artistic and cultural events. If a group is inactive for 6 months, the rule is that we archive the group after consulting with the group’s administrator.

Is everyone visible on the social intranet?

We used various meetings and presentations to get all layers of the organisation interested in the intranet. The groups vary from colleagues from a children’s farm to city guards, and from policy officers to directors. Of course, there are still people afraid to dip their toe in the water. We tell them that nothing can go wrong, and that they should just try it. Our town clerk has an exemplary role, and he is also a member of our steering committee. When the system went live, he wrote a blog saying that it was OK to make errors, and that Rotterdam is a ‘dare and do’ city. He is a massive fan of social media himself, which helps enormously of course.

What are your plans for the future?

The municipality is a large organisation. There is lots of news from the clusters, which have no place between the organisation-wide news. The next release will, therefore, include a widget that allows cluster-specific news to be filtered so users only see relevant news posts on the homepage.

We are using the #wish tag to filter what colleagues want. We are presenting feasible and popular preferences to the supplier, which keeps the entire organisation involved in innovating our intranet.

In addition, we want to focus on the work processes that can benefit from the social intranet. What problems do colleagues come up against in daily activities where the intranet can play a role? These are not necessarily profound processes; the emphasis is more on small actions with significant impact.

What were the biggest challenges in the project?

The most prominent challenge is the scale of the organisation, which makes it difficult to get everyone on board. I approached it in a way that got colleagues from all departments involved. As a result, we benefited from the power of many minds. On the other hand, the core team was kept small to enhance the ability to act.

Another challenge was to coordinate the preferences of the Communications Department with those of the ICT Department. ICT looks at requirements, the platform and the technology in a logical way. However, it is essential to see beyond the social intranet as a mere tool, and to look at its use in the organisation.

Users are central, so ask detailed questions about what they want. It will surprise you how many people want the same as you. Include everyone, from reception assistant to town clerk, from waste collector to policy officer. In general, everyone said they wanted to have more contact with colleagues, to see more of the city on the intranet, and the ability to make better use each other’s knowledge.

Think outside the box, and be very clear about what you want to achieve. We set a clear goal and went for it. I believed in the idea of a social intranet, but you have to be prepared to go off the beaten track. I didn’t take part in this project to make friends, but to set up a resilient intranet for all employees. You must be prepared to be strong when push comes to shove, but don’t forget to have some fun at the same time.